Nearly a year ago, we reported that the neurotech startup Synchron was granted regulatory approval from the FDA to begin a human trial of its brain computer interface (BCI). 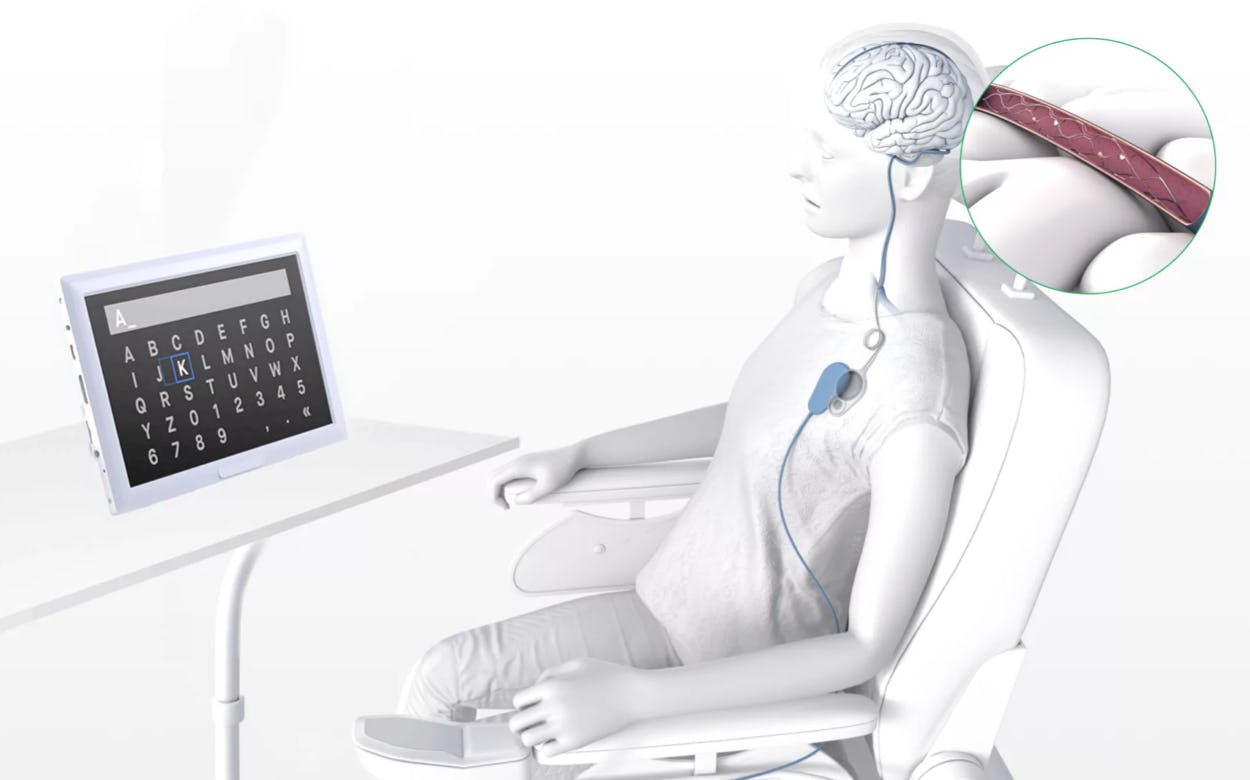 Last week it was announced that the Neuralink rival will become the first in the industry to enroll six patients in a FDA-approved clinical trial. The early feasibility study will evaluate the safety and efficacy of a permanently implanted BCI.

Synchron’s brain implant chip—the stentrode—is about the size of a paperclip and will be implanted in a minimally invasive procedure that doesn’t require open-brain surgery.

The stentrode is a four-centimeter, self-expanding tubular lattice of electrodes. It is inserted via the jugular vein into one of the brain’s major blood vessels.

Once placed in the brain, it detects local electric fields from neurons and relays the signals to a wireless transmitter embedded in the chest, which then relays them to an external decoder. From there, it translates the signals into a standardized digital language, allowing patients to perform everyday tasks hands-free on external devices. These tasks include texting, emailing, shopping online, and accessing telemedicine services.

So far, four individuals with varying degrees of paralysis have received Stentrodes and used them, sometimes in combination with assistive technologies to control PCs while unattended at home.

One of these people is 62-year-old Australian Philip O'Keefe, who has ALS. He received the implant in April 2020 and has been living with it ever since. And with great success. He can now control cursor clicks, and in December 2021, he tweeted: “no need for keystrokes or voices. I created this tweet just by thinking it. #helloworldbci.”

It is amazing what has already been achieved. The New York Times did a great job of summarizing this in a lengthy article.

Nevertheless, the devices naturally have their technical pitfalls due to their immaturity. The Stentrode that communicates via the chest, for example, can only process 20 characters per minute. This corresponds to one sentence every four minutes.

To make brain-computer interfaces market-ready, a customized technology that has so far only been tested on a few people must transform into a product that can be manufactured, implanted, and used on a large scale. Extensive trials must demonstrate that the brain implants will work outside of research and demonstrably improve users' daily lives—and at marketable prices.

The timetable for achieving all of these goals is uncertain, but the industry is optimistic. Thanks in part to pioneers such as Philip O'Keefe.