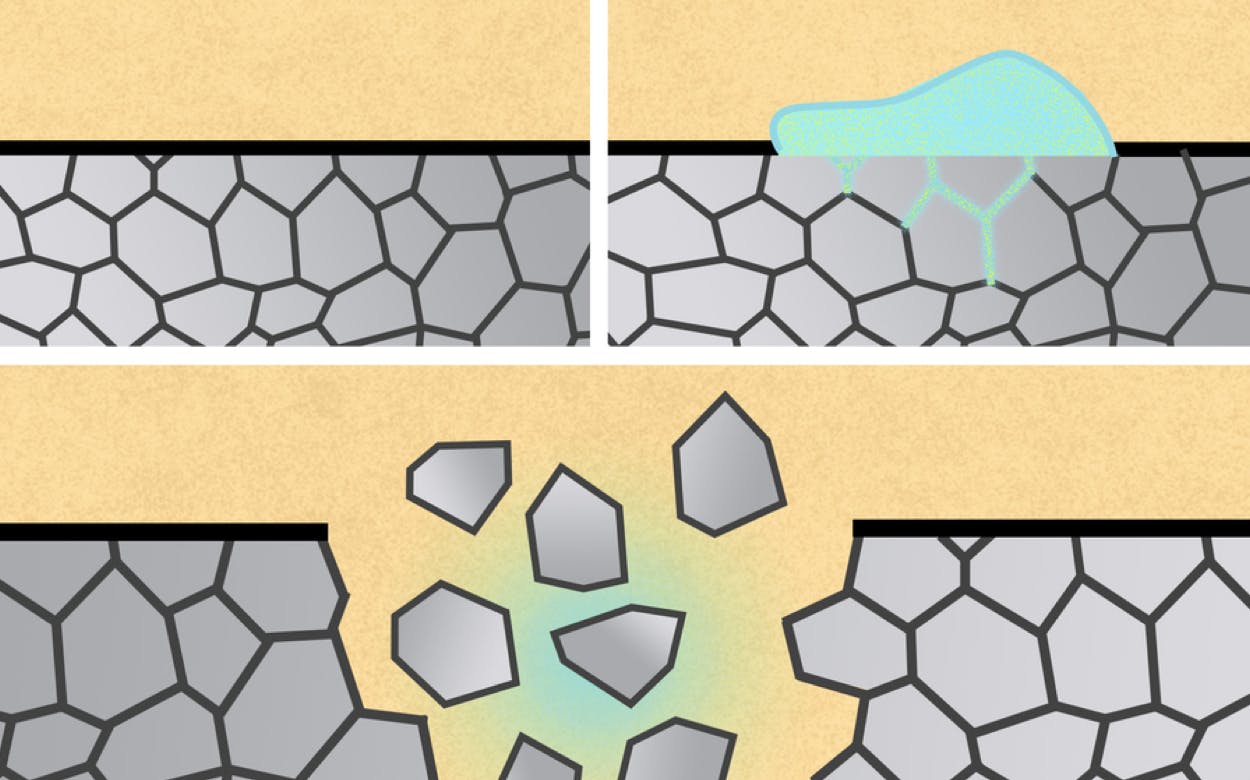 MIT researchers have developed a method for medical devices such as stents, staples, and drug depots to degrade on their own. This advancement could reduce reliance on invasive procedures, including surgery and endoscopy, for medical device removal.

The study, published earlier this month in Advanced Materials, demonstrates that aluminum biomedical devices can be degraded via exposure to a liquid metal called eutectic gallium indium (EGaIn). In practice, this could work by, for example, spreading the liquid on surgical staples or by administering EGaIn microparticles to patients.

The inspiration behind the investigation was a well-studied reason for metal structure failure: liquid-metal embrittlement (LME). This phenomenon involves a solid metal losing structural integrity when another liquid metal interacts with its grain boundaries, causing them to weaken and eventually fail. LME is actually why mercury-filled devices are prohibited on airplanes—the potential LME impacts of liquid mercury on aluminum could threaten the aircraft’s structural integrity.

But when it comes to improving the safety and usability of certain medical devices, this project suggests LME becomes more of a benefit than a danger.

“We wanted to see if we could harness that known failure mechanism in a productive way to build these biomedical devices,” MIT postdoc and lead author Vivian Feig said.

How did we get here?

Although the MIT lab achieved these results, they weren’t initially looking for them.

This approach to medical device removal resulted from a secondary goal in the lab’s long-term work, which was designing a medical device for the gastrointestinal tract. The researchers had been creating devices that stayed in the digestive system for days—or even weeks—to release drugs on a specific schedule.

The team opted for metal versions of these devices due to metal’s durability, but the eventual removal posed a problem. That’s where LME came in.

As the team progressed in their analysis, they realized their LME-enabled approach could be applied to removing metal medical devices beyond the GI device, such as surgical staples and stents.

We imagine that being apprised of these risks may make patients more comfortable in consenting to interventions using these medical devices, improving adoption and clinical outcomes.

Plus, on-demand dissolving medical devices will allow providers to streamline their treatment timelines. They’ll be able to better predict—and ultimately shorten—the amount of time patients spend with their new metallic companions. Overall, clinicians will have greater control over a device’s entire lifespan.

The road ahead for dissolvable medical devices: biocompatibility and other avenues

So, when can providers and patients begin reaping the benefits of these self-dissolving devices?

Of course, the medical technology world won’t likely be welcoming dissolvable prototypes anytime soon. At least, not before more studies point to the safety and reproducibility of these dissolution procedures in vivo.

The study did use animal models to test the biocompatibility of EGaIn (approximating oral toxicology in rats and fitting pigs with gastric stents). And the paper’s authors identified findings in the literature pointing to multiple promising forms and routes for the biocompatible administration of EGaIn, even at high doses.

However, the researchers say that before human patients can benefit from this amazing advancement, the safety and efficacy of these methods require further evaluation.

In the meantime, the MIT team is also excitedly exploring the impact of dissolving other materials through LME.

Feig said: “An exciting thing to explore from a materials science perspective is: Can we take other metals that are more commonly used in the clinic and modify them so that they can become actively triggerable as well?”