The global MedTech market, worth nearly half a trillion USD, is dominated by two regions: the United States and Europe. To understand how these two ecosystems stack up, we benchmarked them alongside major data indicators such as workforce, patents, and venture capital. The result is fairly clear and shows that Europe has a lot of catching up to do. 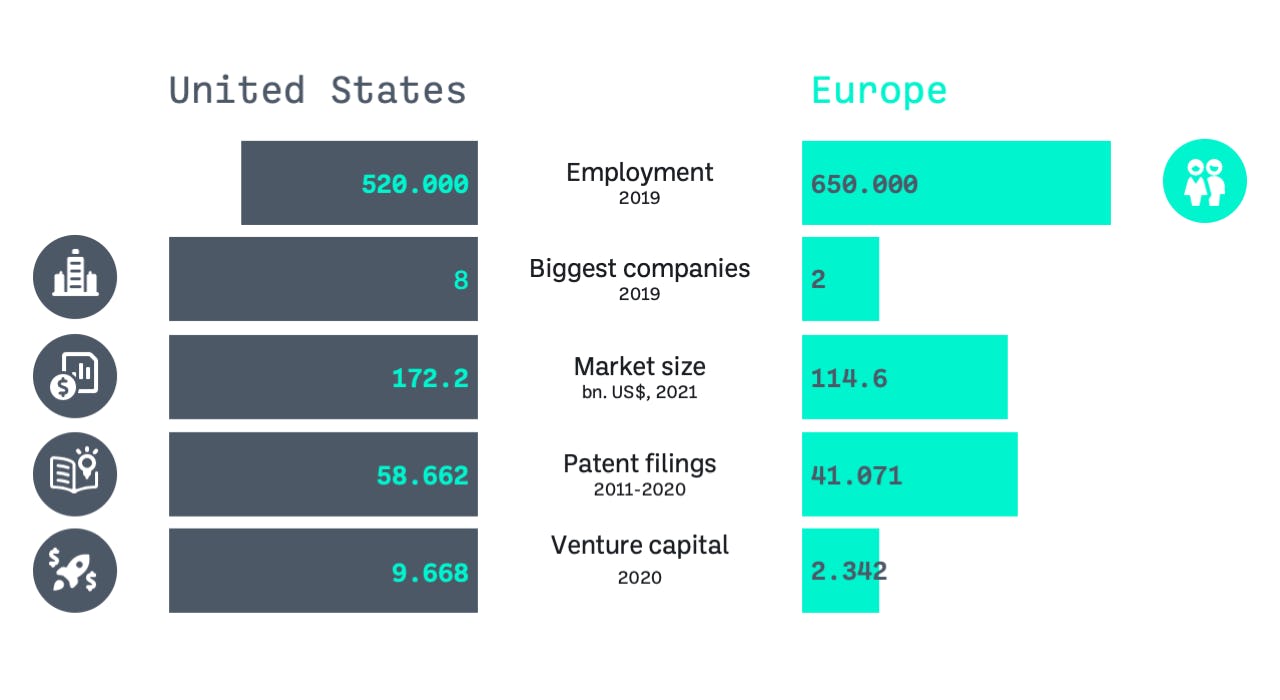 Let's start with how MedTech became the gigantic industry it is today.

Over the last 100 years, medical technology innovations have enabled us to live longer, healthier lives than ever before. Catheters, in-vitro diagnostics, x-rays, and defibrillators are the reason diseases that used to mean death can now be cured.

Since 1960 alone, life expectancy has increased by 38%, with MedTech playing a major role in that development. Yet this progress comes at a price. According to the WHO, $8.3 trillion, or 10% of the global GDP, is spent on healthcare worldwide. In the world's largest economy, the United States, that share is almost 20%. In the OECD countries, health spending per GDP has doubled in the last 50 years.

As healthcare spending has increased, the MedTech industry has also grown significantly. MedTech companies account for $446 billion in sales worldwide. And the signs are clearly pointing to further growth. The research firm Frost & Sullivan estimates that the market will grow at an annual rate of over 6% in the coming years.

According to a study by EY, European and U.S. MedTech companies account for around 90% of MedTech revenue. In addition, all of the 10 largest MedTech companies in the world are based in Europe or the United States.

MedTech is not only a large and growing market, but also a particularly attractive industry economically speaking. There are two main reasons for this. First, the jobs in medical technology consist of highly-qualified positions with a value added per employee of $200,000. In addition, the industry is exceptionally innovative. Research and investments in future technologies such as artificial intelligence and robotics strengthen economic areas beyond the MedTech sector.

So it's clear: The strong MedTech industries are significant wealth generators for the U.S. and Europe. This makes the question of whom the future belongs to in this industry all the more important.

Home of the market leaders

The list of the largest MedTech companies is dominated by U.S. players. 8 of the 10 largest MedTech companies have their headquarters in the United States, including the three largest players MedTronic, Johnson & Johnson, and Abbott. Philips, from the Netherlands, and Germany’s Siemens Healthineers are the only European representatives in the ranking. Although Medtronic is headquartered in Ireland for tax reasons, the company's operational headquarters and most of its employees are based in Minneapolis, Minnesota in the U.S.

Large companies are an essential part of functioning economic ecosystems. They train talent, finance research, and attract suppliers. In this regard, the U.S. is clearly ahead of Europe as a MedTech ecosystem.

The second data point we looked at is the number of employees. After the clear dominance of the U.S. in terms of the largest corporations, the result here is surprising. In 2019, according to a study conducted by Luther, 650,000 people were employed in the MedTech industry in Europe, compared to just 520,000 people in the United States. According to the latest figures from MedTech Europe, as many as 760,000 people were employed in the European MedTech sector in 2020.

A look at the workforce also shows that the MedTech industry is not evenly distributed across Europe, but centered in national hubs. More than a quarter of all European jobs in the industry are located in Germany. German MedTech companies employ over 200,000 people, more than the competition in the following two locations, the UK and France, combined. In terms of population, Ireland and Switzerland are the MedTech powerhouses in Europe.

The employee figures show a fundamental difference between the two ecosystems. The U.S. is dominated by large companies, while Europe has an extremely broad longtail of MedTech SMEs.

A strong national market is a significant competitive advantage for local industries. This is especially true when the state is a major player in the local market, as is the case in the healthcare market. Indeed, government institutions usually prefer to buy from domestic companies. And according to the WHO, public entities accounted for 59% of global healthcare spending in 2018. Therefore, the size of the national market is an important indicator of the strength of an industry, especially in the healthcare sector.

39% of global MedTech sales are made in the United States. Europe accounts for 26% of the global market. This means Europe is still behind the Asia-Pacific region, the most dynamically-growing market.

From a national economic point of view, the extremely high healthcare expenditure in the U.S. is definitely a problem. For the United States as a MedTech location, however, the strong domestic market is therefore a clear advantage.

A new patent every 10 minutes

According to the European Patent Office, no industry files more patents than the medical technology sector—not even the digital communications and computer technology industries. The number of patents is a good indicator of a region's innovative strength. This is reason enough to compare patent applications in the U.S. and Europe.

With a large gap, the U.S. leads Europe in terms of patent applications. Over the last 10 years, more than 58,000 MedTech patents have been filed in the United States. In Europe, by contrast, only 41,074 patents were filed in the same period. Most patent applications here came from the European MedTech stronghold of Germany, followed by Switzerland and the United Kingdom.

A large proportion of patent applications come from the major MedTech companies. As such, it is hardly surprising that the U.S., home to the largest companies, is in the lead here.

The MedTech industry thrives on innovation. German MedTech companies, for example, make more than a third of their sales with products that have been on the market for less than three years.

The number of patents is therefore a strong indicator of an industry's future viability. And here too, the U.S. is well ahead of Europe.

The final factor we look at when comparing the two MedTech ecosystems is venture capital. Most startups still contribute little to the industry's revenue. But in the future, startups can attack the more established companies and become important players themselves.

From the perspective of a business location, it is naturally desirable that these disruptors emerge locally and not elsewhere in the world. A strong startup ecosystem also benefits established companies, which receive new ideas and an innovation boost through partnerships with young companies.

Almost $10 billion in venture capital was invested in U.S. MedTech startups last year, while only about $2.3 billion was invested in European startups. The gap has widened significantly over the past year. While the two regions are quite close in terms of revenue, domestic market, and patents, the U.S. is miles away in terms of venture capital from the European ecosystem.

The bottom line: Europe needs to catch up

Our data comparison shows that the MedTech ecosystems in the U.S. and Europe differ massively. While the European MedTech industry is characterized by small companies, the U.S. is dominated by large corporations such as Medtronic and Johnson & Johnson.

In terms of established industry, Europe is in a comfortable second place and within striking distance of competitors on the other side of the Atlantic. However, in terms of venture capital investments, the European ecosystem is clearly lagging behind. The underfunding of the European MedTech startup landscape may endanger the entire location in the long run. Startups are bets on the future and every dollar venture capital makes these futures more likely. The current numbers suggest that the future of medical technology is uncertain in Europe.

So what can Europe do to catch up?